Due to a lack of infrastructure, Willets Point at Flushing Bay, Queens, NY experiences constant flooding. The rise in sea level, the rise of the water table due to fewer people pumping drinking water from the aquifer, and a hub of discharge points for combined sewer overflows (CSOs) in Flushing Bay all contribute to this phenomenon. By increasing the site’s porosity through dualizing infrastructure, the project aims to increase flooding capacity, keep water out of the CSOs, and send clean water back into the bay. The driving force behind the project is gravity, which dictates how water will move due to topography.

The urban form of the project is derived from and dependent upon the levels of porosity and the movement of water. Where urban density is highest, porosity is lowest and water moves more quickly. The movement of water is coupled with the movement of people. In locations where people move faster, water moves faster. Where people are at rest, water becomes absorbed. The city is about fluidity: the circulation of people, materials, and water. In this integrated network of circulation systems, human movement corridors are overlaid on water collection conduits, preventing streets from flooding while treating water and increasing vegetated surfaces. The project aims to increase the site’s capacity to handle varying water levels, to maximize the vegetated surface area for water intake, erosion control, and nutrient filtering, and to create more intimate streets and public realms.

Sections of my proposed design display the public realm and the interconnectivity of the water treatment system in relationship to the street. They reveal the components at play in the event of a storm. There is an emphasis on shared public space as well as on the fluid movement and containment of water. The selected series illustrates the site as a network of gradients: from hard to soft, impervious to porous, and high density to low density. 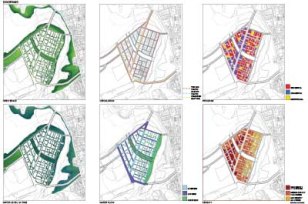 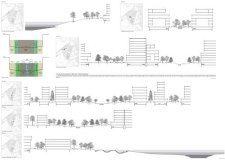